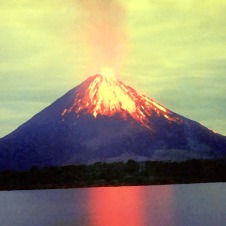 Seams tear through my crust, opening
Furious pools of boiling crimson, spitting
White, scaly ash in the air, landing
All over everything like oily snow

And yet I am not Paradise rising
A gift to Heaven from the Sea
Covered in flowers, fruit, and trees

“Dynamism of a Soccer Player” by Umberto Boccioni

I have always enjoyed “Dynamism of a Soccer Player” by Umberto Boccioni. I have visited it many times at the MoMA here in New York.

In the painting Boccioni breaks down the form of a soccer player into pure energy that moves out into the surrounding atmosphere.

I have never been very good with a paint brush, as many an art teacher and the dingy walls of my apartment can attest. I did, however, attempt to deconstruct a soccer game I saw recently. Here’s to all you strikers out there who like to keep your game simple.

Violence is a terrible thing for a child to carry around

When I was young I often saw my parents fight

My father would tell my mother he would kill her

Then he would threaten us kids

My mother would threaten to leave

And he would threaten to kill himself

She would come over for coffee

Sometimes her face was puffy and discolored

We would be sent outside to play

Through the wooden louvers of the door

My mother comforted our sobbing neighbor

Like she would one of us after falling off a bicycle

Violence is a terrible thing for a child to carry around

They don’t understand what it is or its purpose

Until one day a playground bully turns them upside down

And shakes the coin from their pocket

Other children scramble to pick it up screaming

Their circle tightens around the gleaming profile of Eisenhower

To be the new owner of this hypnotizing treasure

You are currently browsing entries tagged with Poems at John Truelove .